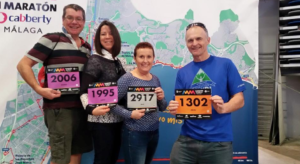 Early December and led by Chair Claire, an elite bunch of LFR marathon runners headed for the winter sun of Malaga. After a smooth flight, where the only delay was waiting for several large household items Claire was bringing for her parents, we arrived in the sun! The party comprised of Claire, Max, Glyn, Mark and John.

We flew in on the Friday and headed straight for the marathon Expo, where numbers were picked up along with complimentary T-shirts. Then it was off to the hotel, just stopping on the way to enjoy the 20 degree sun with a beer or two on the beach. Saturday was a day for most of us to get out and explore the lovely city, seeing many other British marathon runners, most of whom seemed to be staying in our hotel.

Strange to see the Spanish dressed for winter, in coats and jeans, while we were in shorts and t-shirts. Mark and myself took a walk in the heat to a castle perched atop a large hill, not the best marathon prep. The day was rounded off with a pizza / wine meal for 30 in an Italian restaurant, one of our group taking the party spirit to the max. 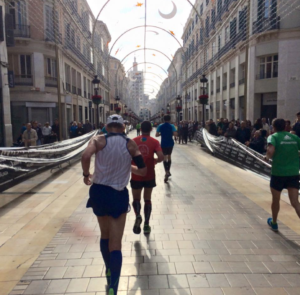 Sunday dawned and the weather forecast was perfect, we met for an early breakfast and as we departed our last member joined, looking slightly the worse for wear. The marathon itself was well organised, had some great sea views but also a few industrial sights. Early on there was an out and back section along the coast that meant we could see other for a shout out and high five.

The crowd support was good and lots of people were there for the last section, through the old town, the sun seeming out of place with all the Christmas decorations.

One of the nice touches was the free beer at the finish, along with a great medal and another t-shirt. All of team LFR were soon safely home and joining in the post-race party. 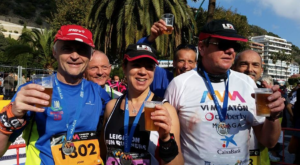 The journey home the next day was trouble free and the biggest problem was getting back into the cold and rain as the plane doors opened at Luton.

Overall a great trip, very reasonably priced and one that we would all definitely recommend.

Have you done this race?

This race as rated by users: