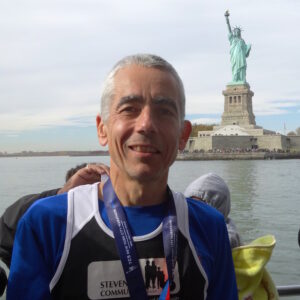 Cost – pennies compared to the cost of getting and staying there !

This year I was lucky enough to be able to enter the NY Marathon – and to run through a town that is famous as a place of movie scenes –it felt like that running through Bronx, up fifth avenue and first avenue.

An early start as you need to get the bus at 6 outside the New York Library for the hour ride to Staten Island and then three hour wait to start !

Eventually we started - to the singing of the national anthem , followed by a Fleetwood Mac song and two miles of great views across the Hudson river to .Brooklyn, and then through various neighbourhoods. The pace was not fast – 50,000 runners means you can’t really stride out but that did not matter and the atmosphere was the best thing about it. There were live bands about every half mile and cheering for most of the way. A vast amount of Paralympic competitors in wheelchairs and being aided – and everyone said “well done” on passing

I was – of course- wearing my LFR shirt so most Americans assumed my name was Leighton and cheered my by name – but I’ll take all the support and cheering I can get.

Drinks every mile or so and food stops at 7 and 20 miles so we were well looked after. A good flat course – no real hills and the most uphill parts were coming over the bridges – not hard work.

At mile 8 in Brooklyn the three separate start groups came together and the atmosphere built from there until Queens, which was a little quiet comparatively, till you cross queens borough bridge into Manhattan .

Mile 16 to 19 is straight up first avenue – slightly uphill and a straight road so you can see as far ahead as you as you want- that was a great sight seeing so many runners all enjoying the day, and the crowd 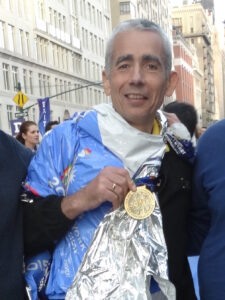 Mile 20 was across the river again and through the Bronx

Then you came across the historic Madison avenue Bridge – one of the double decker ones. As we ran across it was quiet – no crowds on the bridge – but the volume gradually built as we came back into Manhattan, and the great thing about that was that you could hear the crowd before you could see them because of the upper tier of the bridge

So then all the way down fifth to central park, into the park at mile 24 and then a lovely finish in the park. I got my union jack flag out of my pocket and held it over my head as a sprinted for the line

Have you done this race?

This race as rated by users: