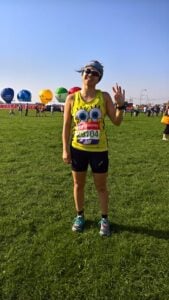 Congratulations to Marianne on being chosen as Runner of the Month for April 2018.

Marianne has been a member of Leighton Fun Runners for some time now partaking in many marathons and Triathlons and even though we don't often see her at club nights, she stands out for many reasons. She sets herself goals and through her determination and self belief she always achieves them and recently despite the heat she completed the London marathon in a great time and showed true LFR spirit en route by helping a fellow runner who had collapsed by the wayside.

Keep it up Marianne.