Runner of the Month: November 2021 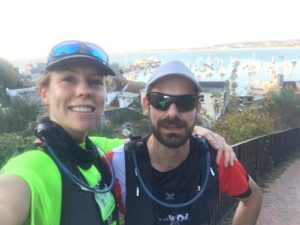 Richard joined LFR in 2016 in preparation for his first marathon, London, where he raised thousands for Riding for the Disabled. Sam joined LFR a few years later.

They take part in club runs as often as is possible when you have two young children, and a few hundred cows and sheep to contend with!!

Richard managed to run the MK Marathon this year in the middle of the hay making season. Meanwhile, Sam treated the club to farm runs and homemade baking.

Sam had a great run at the Leighton 10 and picked up an age group placing. To top it off, a month later in October they headed to Jersey for the two day Ultra Tour of Jersey. While Richard is no stranger to marathons, this was Sam’s first and she jumped in at the deep end completing two in two days.