My couch to 5k experience by Claire Bartlett

Posted on 4th October 2017 Categories: Running Blogs Comments are off for this post 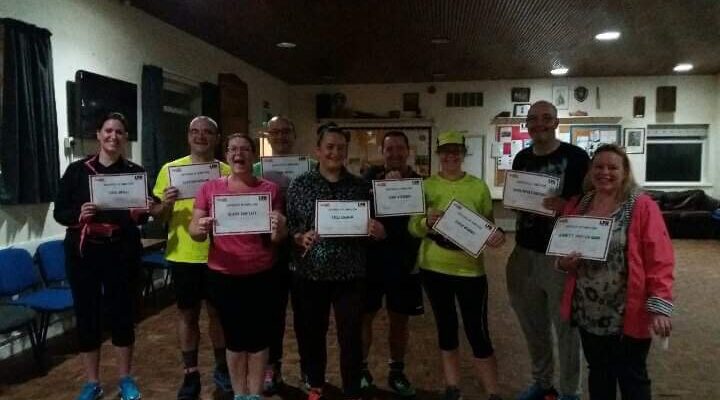 My couch to 5k experience

In July 2017 I needed a new fitness challenge. I was currently spending up to £90.00 per month on my fitness regime and about 8 hours a week in time!

I was getting no-where fast with my weight loss and seemed to be working really hard at the gym. Something needed to change……On the horizon looming in the background was another massive challenge for me…..My ‘Gap Year! (quite scary at 45yrs old!) In October 2017 I am leaving my job, my house and my routine to travel around the world – I was worried that I would not be able to do my usual ‘sports regime’ whist travelling, also I needed to save every penny I could for my travels……What could I possibly do??

I saw on a friends FB page that Leighton Fun Runners were offering the Couch to 5k programme for just £10.00 for 9 weeks – Making £1.11 per week! I had heard exceptionally good reports on the C25k programme, but I have never liked running as I seemed to run for a few minutes, get puffed out and then have to walk to recover – My breathing seemed wrong! So I took the plunge………….I was told I needed ‘comfy clothes and a pair of trainers’ – sounded right up my street!

So Week One was suddenly here……We met at the clubhouse, registered and was welcomed with open arms by Debbie and the other volunteers, who would become our friends, our rock’s and our motivators! The nerves were there, but after a warm-up walk to the park and a few group stretches…..we were off…..The first challenge was to run for 1 minute and then walk for 1 minute…..sounds easy right? Well let me tell you…I was scared…..but the encouragement of the volunteers and the other C25k participants we got through it! Then onto the homework….to complete this exercise twice more before next Monday. I decided that Wednesday mornings and Saturday mornings would be my running days, which gave me some rest days in between. We were split into ‘local’ groups, meaning that people would make friends and meet up outside of the programme to compete the homework – An excellent idea!

Before I knew it week two and three had arrived and I had done the homework on my own! Yet again the support from the club volunteers was amazing. An even better turn out of participants and we were off…… again we got through it. The homework was set and weekly e-mails arrived. Our very own Facebook page was created and friends were made for life! I’m not going to lie, it did get harder and harder, but with the continued support of LFR, one run on my own and one with a friend the weeks passed quickly. I downloaded a C25K app, which logged all my runs. Who knew I would run over 100k over the programme?!

Each week we met with my newly found friends, which brought stories of trials and tribulations. People were experiencing good runs and not so good runs. The best thing for me was at no point did I feel alone! Then ‘All the gear – No idea’ was born. Each week people came with new running shoes (me!), New training tops, Luminous jackets and all sorts of clippy on things! When the nights started drawing in all kinds of lights appeared and on one of our last runs we must have looked like ‘Hobbling Christmas trees’!

The social side of the club really inspired me, lots of top tips, advice, help and encouragement every week. Before I knew it I found myself running for 30 minutes WITHOUT stopping……my biggest achievement so far!

We then shifted our focus on miles/kms rather than time – this opened up a whole new way of thinking for me! It was about the same time Sir Mo Farah ended his running career – Never before had I realised what a MACHINE that man is/has been. He runs 21kms in 59 minutes, never before had I realised the comparison….I run 5kms in 40 minutes, but we all have to start somewhere right??!!

Two weeks before the end of the C25k I enrolled on my first ever Park Run – Let me tell you it’s a while new world out there – 9am Saturday mornings EVERYWHERE around the world…….It’s not a race, it’s a run……We are so lucky to have the fabulous Rushmere Park just next door where the views are breathtaking, but also it bring a few ‘rolling hills’. A totally new challenge for me! But, guess what, I DID IT!

I got to bang the ‘Rushmere Gong!

Then the final week came – we were invite to run with the ‘proper’ running club – what a privilege! The nerves were back, but yet again I completed it and suddenly there was TEA & CAKE……oh yes! Along with a certificate too!

To top it all off, the first ever LFR 5k Race was perfect timing – I did not run myself, but I went along and supported the others, which was great fun for the whole family (and of course, there was CAKE!)

I know the other C25k members will join me in saying a massive thank you to Debbie Rolf, David Ayres and Viv Nicholson (to name just a few) – we all salute you – You have given as so much of your time, energy, top tips and most of all encouragement….we thank you all!

Who knew that running could bring us Unicorn training sessions in our ears (from the app), disco lights attached to our PE kits but most of all it’s turned us from couch potato’s into proper runners!!

It’s been the best tenner I’ve spent in ages. I have met so many like minded people, running can be fun! I smashed the ‘Rushmere Gong’ at Park Run, I smashed the fears I had 9 weeks ago when I started my running journey…..running for a whole minute terrified me, and now I looking at completing a Park Run in Singapore!! Thank you LFR, I honestly could not have done it without you guys!