Posted on 20th September 2016 Categories: Running Blogs Comments are off for this post 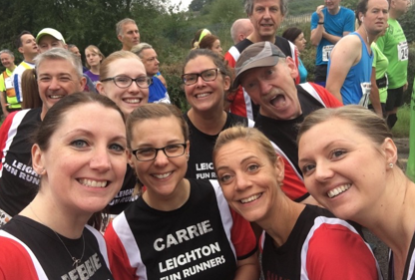 This year running has been tough. An injury in February set me back way more psychologically than physically and my mojo has been off somewhere else doing its own thing ever since. Running has not only been hard, but also not very enjoyable.

About 6 weeks ago I had to give myself a good talking to as I have a Half Marathon looming in October and I was avoiding training at every opportunity - 'it's too hot' 'you are all are too fast' 'I've got this going on'.  So last week I made the effort to arrange a weekend run as I knew I wouldn't be able let down other people if they were relying on me. It was the longest I've run in about 6 months, but as always I found running with others made it an enjoyable experience.

So Sunday morning, 2.5 miles ahead of the training plan I tackled LBAC's Leighton 'Tough' 10.  There was a great turn out for LFR and a nice group of us who are all a similar pace so there wasn't really any point along the run where you didn't have a running buddy. Some people walked the hills and smashed it on the downs and others just kept slogging it up and down which meant we were constantly either encouraging someone or someone else was returning the favour.

The support on route from LBAC was fantastic and knowing a lot of the marshals was even more motivating.

I was very pleased to find that I had smashed my pace and came in nearly 20 minutes ahead of the time I was hoping for. I couldn't have done it without the the fellow LFR girls to help me round. I always thought it was all about the bling at the end, but the bit that is most satisfying is spending time with a lovely bunch of people.

LFR you are amazing!