Posted on 12th November 2018 Categories: Running Blogs Comments are off for this post 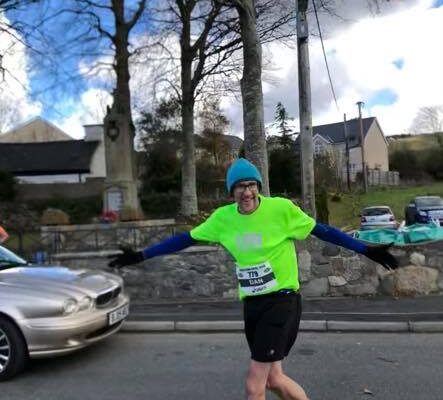 Thursday
I was moping around the house, so Vicky suggested I go for a run, then it started raining! Another hour passed and I made it to the bedroom to change! Eventually I brought enough enthusiasm to the party to get out the door and drove to Long Marston to recce a potential new 10k route. It was a super flat run with some great straight roads and a touch of towpath to break it up. I can see a pb or two going on this one, what a great route but I felt tired following on from the exploits of Snowdonia last weekend.
On my return I scrubbed the dinner and cooked the children before I was reminded that it was my turn to lead the Thursday improvers session which this week was caterpillars, where we run gently along in a line and when the whistle blows the last person runs flat out to the front and this carries on for 30 minutes or so. I love Thursday sessions, they really make a huge difference to your fitness (even if they are tough) but it doesn’t matter what level you’re at, you can still partake.
I return home to peace, as the children are in bed, ready to consume cake whilst I post about what an awesome bunch of runners turned up this week to Improvers, a reminder for tomorrow’s daytime run and to message all our scarers/run leaders to ensure they are all well and truly sorted for the Halloween invite night.

Friday
Up and on the school run before heading down to the Globe (if not a touch late, I’m sure it wasn’t really Vicky’s fault!) to meet the daytime runners. Wow what a turnout, last year when I did the same route it was just me. We took on the Halloween Night run and marked out points in the woods with red/white tape to ensure our run leaders couldn’t get lost (It’s rare that I’m allowed out, so I cannot afford to lose valuable pub time finding runners in Rushmere!).
The outlaws arrived to take on babysitting duty so Vicky and I could run down to the Globe for the Invite night. What an amazing event this always is, over 50 turned up to run the 3 or 5m routes around the woods where our very own amazing stalkers / scarers were hidden. Now I thought they were outrageous last year, but this time I was totally lost for words, Felix hanging in a tree, witches everywhere as for the nun’s, words deceive me! This is where the week went a little wrong and the Kebab incident occurred, we stopped en route home to pick up a lamb kebab and set off again on a gentle jog, within 100m I was limping and had a pain on the front of my left shin. Turns out it is the Anterior Facilitus Tendon that hurts. F&£k it!!! It was a cracking kebab though and perfectly washed down with the latest efforts from the Gin Club. My rucksack ended up covered in Garlic sauce, a small price to pay compared to the injury! A couple of thank you posts later I was in bed.

Saturday
Woke up and limped around the house, last night’s Kebab injury does actually exist and wasn’t an awful dream! I wish I had drunk more or added extra chilli sauce, maybe then the pain would be less!!! Anyway, it’s all go in the Green house, Children to be dressed and fed. Bear ears and teddies are waiting by the front door so that we can be at Rushmere Parkrun by 8.45am as it’s their 3rd Birthday, Dave Ayers 100th and James Parkers 50th. As club Captain I get great pleasure from attending and being part of such events and seeing all your achievements. Vicky and Ana charge off around Rushmere whilst Bear in the buggy and I limp around, pleased with a 32 minute result and now for one of Max’s great cakes.
The Afternoon brings a 3m walk around Whipsnade Zoo with the family, the children still need exercising and Vicky and I prefer to be outside. The children and I are cheeky this year and spend the evening watching Brooklands Fireworks from the bedroom window as Vicky is out for the second night running, this time in the Black Lion!!!!
Before bed I get my kit ready for XC and ensure I pack a box of pens, spare club top, a basic First Aid pouch and safety pins, there’s always someone who needs something.

Sunday
Up at the crack of dawn, taped up my leg, quick breakfast and ensure the children have snacks, drinks, hats, gloves etc packed as we won’t be back until early afternoon and off we go to Junior Parkrun to help Vicky setup this week’s event.
A few hello’s and running banter with parents before all is underway, then I shoot off to collect Steve and head for Dunstable for the first XC race of the season. Firstly, it’s the best turnout I’ve seen in the five years I’ve been a member of LFR and certainly the best results by a country mile. I always try to be there to shout words of encouragement and try to motivate you all before races, however tough it maybe personally at present, “Let’s go do this LFR”. The Men came in 7th but the ladies managed 6th!!!!! WE NAILED IT GUYS, WHAT A TEAM PERFORMANCE, WHAT A CLUB. Next up is Wellingborough on 25th. Finally home for a late lunch and cakes whilst icing my leg again and posting thanks and congratulations to all who’ve been racing this weekend.
The weekend is completed with a cruise up to MK to see the fireworks in Campbell Park (Ana loved it as did the Bear but he did fall asleep in my arms during the finale! Home for a G&T in front of a Murder Mystery (whilst adding this weeks’ post of club runs) in our PJ’s!

Monday
Woke up with a rather achy leg and remembered that I hadn’t collected all the red/white marker tape from the Halloween night, so went for a gentle recovery 4.3m limp to do this. Quite a lot had vanished already, so I thank those people who collected it on their travels over the weekend. More ice, elevation, compression and rest for the poorly leg.

Tuesday
I remember that Max still has my Clubhouse keys from last week’s Cake night, so I go for a gentle leg stretch up to her house to collect them. Dinner to cook, children to clean and then the matter of club night. I arrive just after 7pm and realise that there is football AGAIN and wonder how bad the parking will actually be!!!! Whilst awaiting everyone to arrive, I sit and make notes on what I must remember to say. Then I try to get around as many people as possible welcoming them, finding out about their weekend and running and being introduced to potential new members, it’s never difficult to sell the benefits of LFR to them. It’s great to hear so many different stories and achievements each week, one of the best points of LFR is the community feel of the club.
So we head out on the “Ouch & Back” route up and down a plethora of hills, as with all Out and Back and 5k runs, I act as Tail runner, ensuring everyone gets back safely. I always set off after everyone that way I can encourage / chat to everyone I pass. That really hurt though, managed 7m with Andy, James and Martin and my shin was a touch sore, home to ice it and eat Apple Crumble with Ice cream!

Wednesday
Still broken, the shin hurts, Lisa Charley appointment is booked and I’m resting up, icing and elevating. The fitness is definitely there but I need to ensure, however frustrating it is to just sit here, that I am injury free for 17Th Nov Dirt Half! I’ve only run one half this year, the Isle of Wight with about 1800ft of climbs, so I really want a quick one in the bag, hopefully under 90 minutes this time round. Fingers crossed! Maybe I should go for a swim……………

Running is fantastic fun and there is no better place in the world to do it than with LFR, where you will find a club run or a local event peppered with members almost every day of almost every week. Don’t forget if you’re going for a run and want company, just post about it, if you’re in need of coaching advice, just ask our experts Neil and Matt, if you want to see something different on a club run, just share your ideas with me. By the way, at the time of posting this, Lisa has fixed me, Bring it on!