Posted on 17th April 2018 Categories: Running Blogs Comments are off for this post

Almost two months ago I told you all about my grand plans – ambitious, but grand – for the MK Marathon.  I’m an Ambassador this year. An event I love. I had to get stuck in. At that time it was just under 11 weeks to go.  We’re now at under three weeks to go until race day. Terrifying! How have I been doing?

At that time we were on Week 5 of my new and improved training plan.  This had me doing 22-24km.  I was thinking about doing the Gade Valley Harriers training run.  17 miles, though. For various reasons, this didn’t happen and I played Hero Quest instead.  Not to worry, I’ve got the Deerstalker to contend with the following week.  Then the Beast from the East arrived along with Storm Emma. I ran that week, slowly and tiptoeing on the ice and snow. Unfortunately (but thankfully), Deerstalker was cancelled so the group of LFRs heading up to Scotland had to find something else to do.   The speedy bunch went out in their kilts in the snow. I wouldn’t have been able to keep up, so I opted for a slow 10 miles in the snow (not in my kilt). Anne and Sally joined me. Off we went. It was a struggle from my lack of training, but I carried on. All of a sudden, after about a mile, slip, crash, boom.  I did what I do best – turned my ankle, fell over, ouch. Carried on, but the pain in my ankle became worse so I left the girls to get lost in the woods whilst I hobbled home to sulk. The next day, I could not put weight on it at all. Nightmare.

Sprained ankle.  Only me! I couldn’t walk properly for quite some time, so running was out of the question.  I was still determined to make the marathon, however I couldn’t do the MK Festival Half as I still couldn’t run properly.  I attempted Fartlek, but was in too much pain to carry on not even a mile in. Oakley 20 was cancelled (phew!). Attempted a Tuesday night club run, again one mile in and too much pain.   I was entered into the Bedford 20 that weekend. I made the decision that 20 miles would be a stupid idea, clearly. I haven’t run properly in months and this is just going to hurt. Another LFR member training for a marathon could make use of my place, so this was transferred to her.  I still went to support…that was fun! Quite a few LFRs to cheer on.

The following week I was leading a club run.  Managed that, but still some pain. It was that night I got home, sat down and said…enough is enough. With less than six weeks to go, I’m not going to be able to do this. I can’t get up to marathon distance.  I could try, but I would hurt myself more and ruin myself and my mind for the challenges later in the year. I didn’t want to give up completely so I asked the very lovely race director if I could drop down to the half.

And here we are.  I’m still an Ambassador, but I’m going to run the half marathon instead.  It’s still a course I enjoy (although I prefer the marathon course, I won’t lie!).

April has been ok so far. I completed the 5 caKe run and the following week’s club run with support from the amazing Clare.  I messed around in the pool with my kickboard and led one of the Thursday Improver sessions (hills, hills, hills!). No weekend running, however.  Still some ankle pain…and  foot pain. An annoyance more than anything.

Well…I’m still behind in training even for a half.  I’ve recently been looking at my training stats since I started running in 2015 (not that there’s a lot). I’ll be writing about this more in my personal blog.    I realised  that I’ve only really trained “properly” for one event – my first half marathon.  And “properly” just means two mid week runs and a run at the weekend.  For the three months leading up to that half I ran a total of 163.85km.  I’ve no idea what this means, but it got me round a half marathon.  So far this year I’ve run 135.69km. Poor.  Between now and race day I’ve no idea what I’m going to be adding to this, but this is my plan until then (including this week): 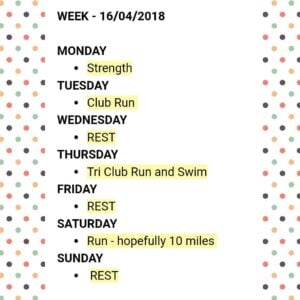 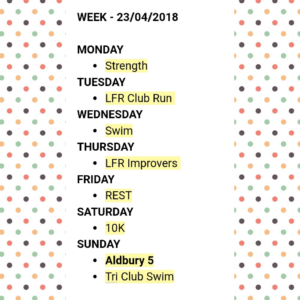 My main focus is to get to 10 miles this weekend.  If I can run 10 miles, I can run a half marathon. This is true of anyone.

The only other event between now and race day is the Aldbury 5.  5 miles. Trails. Big hill. Wonderful event. I did this last year.  It was awful and awesome in equal measure. I’d recommend it to you all.  Enter here: Aldbury 5 Entries.  Come join me and listen to me curse the universe for having a vertical climb just as you start.  (Just ask Coops).  It really is a great event.

And then it’s the MK Marathon Weekend!  Of course I will be doing the Rocket 5K the day before.  I want that challenge medal. I would have been doing that even if I was doing the marathon.  My 5K PB is still on that course from 2016.  I want to beat it!

If you’ve not entered the events yet, why not?!  Get involved!  Enter here:  MK Marathon Weekend Entries. Places are going fast so enter now!

If you don’t fancy running, you can volunteer on the day.  They still need help.  Have a look here to register:  Event Crew

And if you don’t fancy doing either of those things, then come up to Milton Keynes anyway!  It’s a great day out and there are LOADS of LFRs taking part in both the half marathon and the full marathon.  It would be great for everyone running to see LFR support on the day.

So that’s me for now.  I’m sure I’ll write about the event once it’s over.  I’m gutted I’m not doing the marathon.  I really am.  Particularly seeing the amazing achievements of other club members completing theirs.  I am in awe of their training, their running, their determination, their races.  Well done, marathoners!

There’s only one thing I need to do now.  Run.  Just run.