Posted on 16th May 2018 Categories: Running Blogs Comments are off for this post 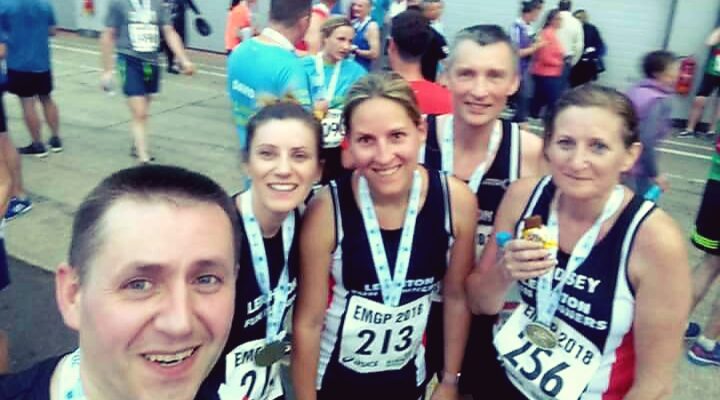 As a fan of motor racing, when Silverstone 10K got advertised it was a run which I definitely wanted to participate in.  To run round the home of British Motor Racing…you don’t get many chances to do that.  On the day it was exciting as you drive through the gates and park in Silverstone and then you go to collect your race number.  You do need to know it beforehand as all you do is tell them the number and they hand it to you.  I would recommend that you bring your own pins to put your number on your shirt as they quickly run out of safety pins. The announcer said they had double the number of applicants this year and the totals were up to 1800 runners! I don’t know if they were including the wheelchair athletes.

They set the wheelchair users off five minutes earlier than the runners.  When it came for the runners to line up they had pacers running from 40 minutes and every 5 minutes after which is really helpful as you can pick a pace group that you want to run with or to beat.  I joined the 45 minute pace group as I was aiming to beat 45 minutes this time.  I never heard the horn to set them off, I just followed the crowd and as we went over the timing mat I set my watch off.   I kept with the 45 minute pacer for the first mile and then pushed on in order to stay in front of him.  I can now understand how motor racing drivers are when they come to cornering as it is the same for runners as everyone bunched up when they came to the corners trying to save those few seconds. As my watched beeped when we came to each mile I was checking the time just to see how I was progressing over each mile.   The track is not completely flat as people were expecting.  I noticed there is a slight rise and a slight downhill as my mile times kept going up and down respectively.

As I approached the 4K marker the lead wheelchair athletes were coming through on their final lap and it is amazing how these racing chairs are set up.

When I went through the start line onto my second lap, I heard my name shouted.  I looked up and it was Graham Cooper cheering me on!  It turns out his daughter was running in his place due to his injury.  It is a real big boost when you have your friends there cheering you on.

As I went through the water station and onto the 2nd lap, I did regret not grabbing a quick drink but I pushed on.  All the way round you had all the other people and marshals cheering you on which is a big boost.

A couple of times the pacer caught up with me making me think is he really running a 45 minute pace so I pushed on again!   I actually caught up with one of the wheelchair athletes and what surprised me was he was racing in a normal wheelchair.  I wished him good luck as I passed him as a friendly encouragement.

Once we reached the final 9K marker I could still hear the pacer behind me encouraging everyone so I pushed harder again as we turned into the pit for the last 300m.  You had everyone cheering as you give it all you got for that last part.   I even managed to notice Natalie Ahlrichs in the crowd!

As I passed over the timing mat I stopped my watch and looked at it and was overcome…I had beaten the time I was aiming for! 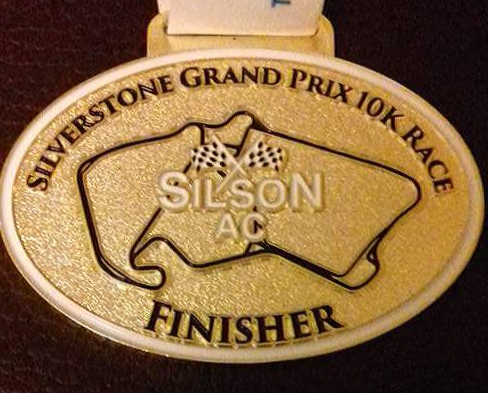 I walked through the pit lane to collect my medal.  This was the first time I actually felt I wanted to throw up.  I went over to the pit wall and lent over just in case, but luckily I didn’t!  I don’t know if it was the race that caused it or whether it was the medication I am currently on for depression. I straightened up and waked and got my medal and bottle of water and the Soreen little loaf they were giving out (that went to a friend at work as she loves them). I grabbed a cup of water from the table where they had held the water station as that is all I wanted and walked down to see the rest of our club members in and to get some photos of them coming in.  I even saw in the wheelchair athlete I said well done to.

Would I go do it again?  Yes, 10k is a good distance to hold there as an event.

Would I recommended it?  Yes, you can get a PB as it is reasonably flat and the atmosphere is really good (plus no pot holes).

I will say this it has made a difference to myself as while I been fighting depression this race has put me in a better place.   I was on cloud nine going home and was so proud of my achievement.  It has raised my spirit and confidence.