The History of LFR

The History of LFR

Leighton Fun Runners has come a long way since it was first established back in the 80’s, though it’s still kept one thing consistent throughout the years, and that’s the fun factor!

Where it all began...

Leighton Fun Runners (LFR) was formed on the 14th February 1983, this came about after a group of 12 friends began running together in the early 1980’s. The club was formed under the leadership of Verdun Webley after the friends decided they didn’t want the formality and competitive approach of the Athletic Club in town (LBAC).

The runners met at Tiddenfoot Leisure Centre on Tuesday evenings, where they eventually chose to hire a squash court for the meetings allowing pre run exercises to be done. There were normally only about 18 members on a night, with club fees being 50p a night, which actually isn’t any different than it is today! Though of course now we pay annually. The members continued to meet in the squash court until membership became too large to be comfortably accommodated in a court.

In the early years, membership was relatively small, somewhere in the region of 20-30 members but this was still enough to allow participation in group races such as the Runnymeade and Vauxhall Relays. Membership remained fairly stable through the 80’s and early 90’s during which time other activities began to be established. The 3CXC league was joined, this is the same league that we run in today.

The LFR Logo and Club Kit

The sweatshirt shows the early winged trainer logo, which in 2008 was updated and redesigned by Angela and is still the LFR logo that we use today.

The airtex vest and shorts were very '118118' but are still practical on very hot days!!

The rumour was that we didn't really choose the club colours of red, white and black. Apparently we were looking to get some club kit, and those colours were on special offer.  There was a "that'll do" moment and the rest is history!! 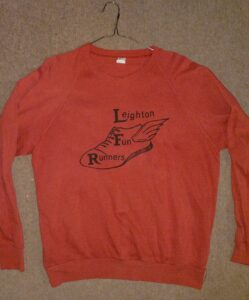 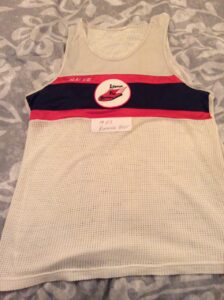 In the year 2000 membership was still low at only 34 members, but as the years creeped on membership was on the rise. In 2003 as the club celebrated its 20th Anniversary and membership broke the 100 mark, but it wasn't until 2018 that we reached 250. In 2019 we surpassed 300. However, when covid hit in 2020 membership unsurprisingly took a hit and we dropped to 220. When membership came around in April 2021 we saw a flurry of new members join bringing our numbers to over 240, and we seem to be growing weekly. For the first time for a number of years our membership is also 50 / 50 equal to men and women! Women have had the upper hand for the last few years...

LFR has lifetime members; these are some of our original members who are still with the club today.

For over 25 years the Club used Tiddenfoot Leisure Centre as its base, however as membership grew it had become quite impractical to use a squash court for club nights. A search for alternatives took place and eventually the Cricket Club in Bell Close was chosen for the new HQ. LFR has been at Bell Close since July 2008 and this remains HQ today.

Why LFR raises money for charity...

One of the founder members of LFR was Carol Haslam. Sadly, in 1992 she succumbed to Cancer and passed away. Being an enthusiastic and committed runner it was decided that an annual running race would be held in her memory. This was 10km, a multi-terrain run centred on Tiddenfoot Leisure Centre and began in 1993. It was a small event attended by her brother Clem to whom a cheque for Cancer Research was presented each year. Over the years £25,000.00 was raised for Cancer Research, before it was agreed that a new charity would be chosen annually.

For many years before the AGM in February members have the chance to nominate a local charity who they would like LFR to support for the forth coming year. There are normally about 5 nominated charities, at the AGM one is voted in by the members. To see who LFR are supporting this year click HERE. 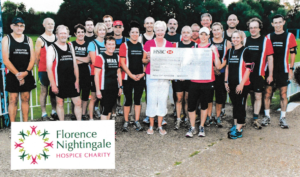 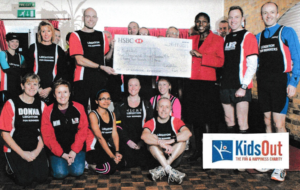 Club Competitions in the early years were the 5m and 10m handicap races (our Watchless races today) and the Cross Country Championship. Awards for improvement and general support for the Club gradually expanded and were split between ladies and men. These all evolved into the current range of awards that are awarded today. A list of winners over the years can be seen HERE.

A look through the years...

1991 - A new overseas trip venture was tried; This was to The Hague with just a handful of members participating. However, this did establish an annual event and many were organised in the ensuing years. Visits were made to Reims, Cologne, Jersey, Majorca, Paris, Amsterdam (twice) and Brussels. 3 trips were made in the UK; 2 to Race the Train in Tywyn and another to Dartmoor Vale nr Torquay. Eventually as membership grew individuals and small groups began to make their own arrangements.

1992 - The Golden Boot Award was introduced! More about that further down...

1994 -The 1994 AGM was a memorable affair. The Chairman was a local councillor and at the last minute was unable to attend. The Captain took over the Chair and raised an AOB that the Club should join with LBAC. This almost caused a riot resulting in the Captain walking out of the meeting. The Secretary took over and managed to cool things. There wasn’t support for the idea although over the years meetings were held with LBAC to discuss merger but there was insufficient common ground to make this move.

1994 - The club took over running the London Marathon Coach for its runners and spectators, including offering spaces to LBAC. It was a good start to the day and gave everyone a chance to rest weary limbs and share stories on the way home.

1997 - Martin Walker has been LFR's longest standing Captain and stood for 13 years!

2002 - In the absence of Google Maps, Strava, Map My Run, etc., Martin Walker produced a running map of Leighton, which is in the style of the London Underground. Distances in between road junctions are in 100ths of a mile e.g. 75 = 75/100 of a mile. This map shows how much development Leighton Buzzard has seen over the years! 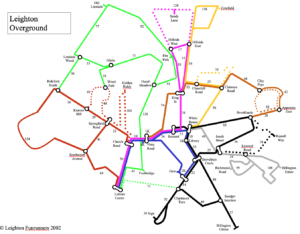 2002 - The first Xmas Treasure Hunt started and this is still something LFR still does to this day; a Xmas Hunt Quiz, which finishes with a tipple or 2 in the Black Lion!

2007 - Paul Dimmock Memorial 2 Mile Fun Run/walk and 5 mile run.  Paul Dimmock was a well respected and fast runner, a member of both LFR and LBAC who sadly died one club night. This race was held on the Leighton Bypass (between the Soulbury Road and Bletchley). The race raised over £5000 for three charities and prizes were presented by Paul's widow. (Several members of the Dimmock family took part).

2009 - Introduction of "Beginner's night", which was designed to attract newcomers. Over the years this led into our now very popular Couch to 5k (C25k), which is run twice a year. Many of our existing members have come through this program.

2016 -  To celebrate opening of the Dunstable bypass we were able to hold a 5km run on it. This was the first part of the bypass that goes to Woodmans' Estate from the top of Houghton Regis.

In 1992 the Golden Boot Award was introduced. For many years this was awarded by Pete Bolton for an unusual or humorous event during the prior year. This was usually a hilarious affair with Pete doing a “cabaret” after quite a few beers!

(A memorable winner was a runner who had washed his trainers but didn’t rinse out all the soap. During the next wet run he finished with bubbles coming out of his shoes! Or perhaps the time someone decided a farmers gate was easy to get over but ended up caked in mud as he slipped going over it)

Note: As the presenter of the award Pete was never able to receive it. However on a run from 3 Locks to Stoke Bruerne he continually warned the group to avoid the mooring rings. As we approached Great Linford there was a crash and shouts from behind. We all turned to see that Pete had tripped over a ring and crashed into a rather startled fisherman. He quickly made apologies and we ran on. This could not go unrecognised and at the next Presentation I gave him “The Golden Ring” along with a letter supposedly from the Angler, describing his trauma and need for counselling, plus a bill for his squashed sandwiches and lost bait!

From September 1982 to November 1986 there was a popular TV show called the “The Late Breakfast Show”, which was hosted by Noel Edmonds. The show had the Golden Egg Award which was presented to individuals who had mishaps or who had done crazy things. This is where the idea arose for the LFR Golden Boot Award. The foot manikin was donated from the Co-op clothes shop in Leighton Buzzard, which is now Santander. The original running shoes and sock belonged to Peter Bolton! It was only a few years ago that Max Marshall kindly resprayed the shoe plus donated a new running sock!

Peter became quite the celebrity presenting this award and provided great entertainment! We understand the presentation always became more entertaining after a few beers had been consumed!