Posted on 14th June 2017 Categories: Running Blogs Comments are off for this post 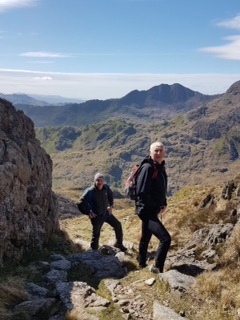 The race was delayed due to the usual briefing, but the weather was shining and everyone was in good spirits. Both the Short Fell and Challenge Races set off at the same time, to a veteran shouting 1 2 3! The track begins flat but boggy with many stepping stones to help you along. After a few hundred meters, it’s a near vertical scramble up the deceptively difficult waterfall path. Once at the top it was time for a quick run to the bottom of Y Gribin Ridge. Y Gribin ridge was described as a “scramble of the easiest grade”, except it isn’t. Sheer drops coupled with slippery stones topped off with the fact I am terrified of heights!

At the top of the ridge and once I had caught my breath I set off towards the first checkpoint, Glyder Fawr Summit. The path from the ridge was mostly flat but the ground was littered with boulders, rocks and jagged stones. After a careful but speedy run, I had completed the first 1000m ascent!

A swift 90o turn and I was off down the side of Glyder Fawr trying to find the right track – too late! After descending the steep rocky terrain, I ended up in the place I wished to avoid, the bog! Trudging on with wet feet eventually I could see the car park at Pen Y Pass, the half way mark.

After a quick pit stop at the Pen Y Pass refreshment stand, I was off again for the final half. The beginning of the Pyg Track is no easy feat but thankfully it flattens out within half a mile. Up and over the sty, picking up speed along the flatter sections of the track whenever the tourists allow! Scrambling is required at the usual bottle necks to avoid queues and eventually the ZigZig track appears, along with a clear view of both Carnedd Ugain and Snowdon Summit. After winding up the ZigZags, amongst the traffic, I reached the Copa summit stone at the saddle (next to the railway). With Snowdon summit in sight after a gruelling day, I turned my back on it and begin the ascent of Carnedd Ugain!

Once I had bleeped the checkpoint at the top of Carnedd Ugain it was a quick 180o turn and back down to the saddle. From there the summit of Snowdon could be seen but a few hundred metres away. A gentle, but slogged, ascent up to the Summit to the last checkpoint and…bleep! It was finally over…except the 5 miles walk down the slowly descending Llanberis Path.

Back down in Llanberis the results were revealed and I achieved my target – fastest M60 with a time of 3 hours and 12 minutes!

To Top things off, I have since discovered that Dai won the men's pairs race and the over 60's with a new record time - GO LFR